Over the next two years, MK Gallery will work with Townley and Bradby on Playing Out. As a collaborative artist practice involving two parents, and at times, their three children, Townley and Bradby incorporate mundane domestic routine and the emotional intensity of family life into their art. They will be artists-in-residence for two years in Conniburrow, and the neighbouring communities of Fishermead, Downs Barn and Springfield working alongside participatory artist Georgina Manly and a research student from the University of Northampton. Their work in Conniburrow will link up with Big Local Conniburrow, a groundbreaking project run by the local community.

The family describe their first encounter with the MK Gallery staff team:

We make work about the family, and sometimes we do this as a family. Vic* suggested that for our first encounter with the other MK Gallery staff we could do a presentation of some sort. The idea was to give staff an idea of our approach and our practice. In our experience the slides+speaking format doesn’t access the ways that children think or communicate. We wanted to use a format that all five of us could take part in.

This year we have been trying out ways of performing as a family. So far, the main features of our family performances seem to be:
– tension and arguments in the days beforehand
– minimal rehearsal (ideally no more than half an hour)
– a clear structure that we can improvise around
– some props

The performance took place in the Project Space and made use of the five large windows. As the gallery staff were coming in, we were in our places, on the window ledges, hidden from view by the blackout curtains. Once everyone was seated we began to sing long notes and to gently waft the curtains. After a few minutes we stepped down into the room. We kept hold of the hem of curtains so they dipped and climbed behind us like vampire capes. We then took turns at telling the other four to be quiet and to listen. Every so often we would dash to a table to grab one of the props to help us. The props included velvet dog ears, woolly leg warmers, a cock’s comb hat, various percussion, a Russian hat, a rain stick, a head scarf. Each dash to the table was a chance for the others to steal that person’s place. We ended by all trying to balance on the same small wooden stool.

*Victoria Mayes is Head of Learning at MK Gallery 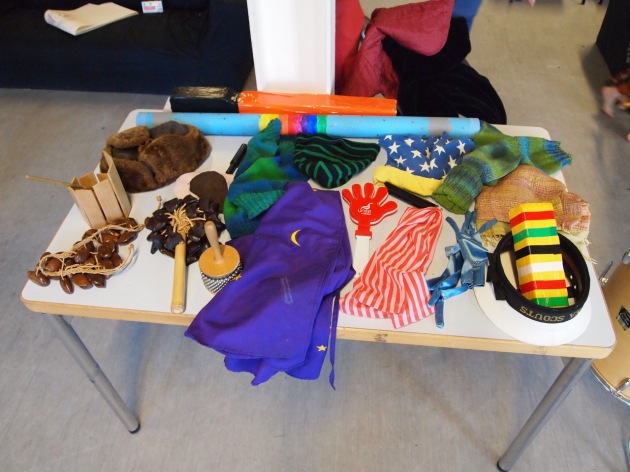 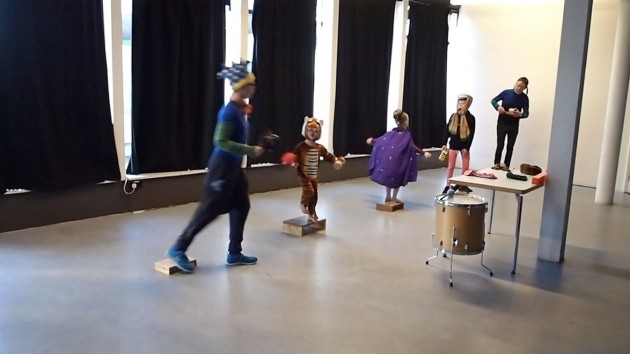 Over the past couple of months, MK Gallery’s latest Family-in-Residence, the Pozzuto family, have been collaborating with artist Willow Mitchell to bring you a fun Minecraft inspired event for all the family on Sunday 18 December.

Join us as we travel through a portal and explore a land of gaming and pixels. Together we will move around creative biomes (zones) and as we construct and create, we will all become players in our own cyberspace.

The Pozzuto family have lived in Bletchley for the past seven years. Comprised of mum Leanne, dad Riccardo, nanny Shirley, and children Olivia and Leo, they are regular attendees to our Collaborate family workshops. Leanne identifies Shirley as the creative influence in the family, with this creativity now being shared with the grandchildren.

We are very excited to have them as our third Family-in-Residence and hope that you can join us on 18 December from 1-3pm to celebrate their good work. Tickets cost £1 per person on the door and can be reserved here. 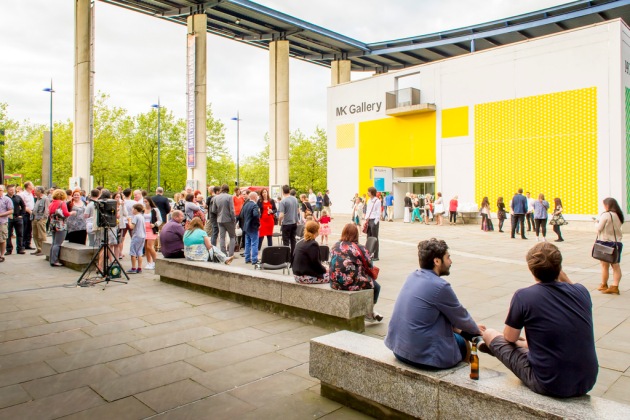 MK Gallery has signed up as a charity partner for Milton Keynes Marathon and Half Marathon Weekend 2017.

Consistently ranked in the top 10 UK marathons, Milton Keynes Marathon is the perfect event for first-time marathon runners thanks to its fast and flat course. Runners pass local landmarks on the green and scenic 13.1 and 26.2 mile routes. We have places available for runners who would like to fundraise for us.

One participant who has signed up to run for MK Gallery is marketeer, Kate Mooney, who states: “Growing up with an interest in creative pursuits was not the easiest in Milton Keynes. As a new town it lacked easily accessible culture, but at the age of 16 I was introduced to MK Gallery via their youth outreach programme Lost & Found. It is no exaggeration to say that it opened up a whole world to me, giving me the chance to have a hand in planning music events and even our own exhibition.

I will be running the MK half marathon in support of the gallery because I believe it is vital that they have the funding to continue opening their doors to young people and bringing interesting and exciting culture to a town, that at times, sorely needs it.”

This will be Kate’s first marathon and we wish her the best of luck!

We have complimentary places on offer to runners and ask that they fundraise a minimum of £100 for MK Gallery.

If you would like to run for us, please contact Ellen Myers via emyers@mkgallery.org or by telephoning 01908 558318. Visit our BT My Donate page for more information.